The Story Of Paul Kagame: How He Became Both Dictator And Savior

Posted by Soji Omole on July 09, 2019
How do one characterise a man like Paul Kagame? he is loved by his people for his transformation of Rwanda after the Genocide. But to many others, he is a no nonsense brutal dictator.
Paul Kagame was born in the middle of conflict, when tensions were rising between Rwanda’s ethnic Hutus & Tutsis in Rwanda.
His family were prominent Tutsis related to the ruling Tutsi Monarchy. He was barely 4 years old when the Hutus came into power in Rwanda and revolted against the Tutsis, he watched his home burn to the ground, his neighbors killed,. – His family escaped to the neighboring country Uganda and became refugees.
It was rumored that his father died of famine, though he never confirmed it. He grew up a “Tutsi” Refugee living in Uganda. They were second class citizens treated like slaves and living in appalling conditions. 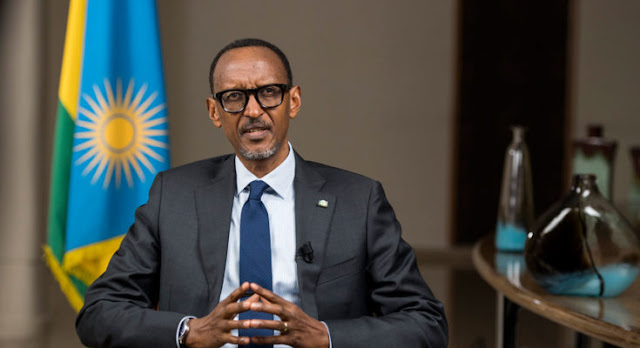 But because his family was prominent, he was able to leave the camps to forge his way through the best schools in Uganda, meeting friends like Yoweri Museveni who later became president of Uganda
In 1982, Ugandan president Milton Obote sent away thousands of Tutsi Refugees who had homes and properties in Uganda and forced them to leave everything behind. Some prominent Tutsi Refugees turned business men were killed or expelled from the country.
Frustrated and disillusioned Paul Kagame joined a rebel group that wanted to overthrow the Ugandan president. Many Rwandan Tutsi men joined this resistance because of his hostile policies towards them. The rebel leader was Yoweri Museveni - his friend and former classmate.
In 1986 Paul Kagame played a key role in successfully overthrowing the Ugandan president after years of guerrilla war and their rebel leader Yoweri Museveni became president of Uganda.
The Tutsi RPF attempted to negotiate the return of exiles to Rwanda with Hutu president Juvenal Habyarimana -They demanded the right to own a Rwandan passport and come into Rwanda when they wished to. The dominant Hutu government rejected this request!
1990-Tutsi rebels invaded Rwanda
Led by commander Fred Rwigyema they came in through the North of Rwandan and allegedly killed thousands of civilians and military men. The president of Rwanda a Hutu leader Juvenal Habyarimana  called out to France for help. Rwanda was a French colony, hence France sent troops to halt the Tutsi rebels advance into Rwanda.- RPF was defeated in the battle and their commander was killed.
With Fred Rwigyema dead Paul Kagame was now fully in charge of a broken Tutsi rebel group.
The RPF have lost their first battle, but for Paul Kagame and his men he would rather die than return defeated to Uganda. He moved most of his army to the mountains to heal and regroup, while some staged attacks in the villages as a decoy.
From his hideout his army was growing, as more Tutsis exiled around neighboring  countries came to join the resistance army. He trained his army, instilled discipline, gave rules, it was win at all cost or die trying. The mountain altitude where they hid was so cold to the extent some soldiers froze to death.
Between 1991- 1993 Paul  Kagame’s men terrorized Rwanda Guerrilla war style.
They attack and raid villages, kill hundreds of Hutu civilians and disappear. Paul Kagame had taken control of at least 5% of Rwanda blocking important entries for import and export. The Rwandan economy was weakened, there were internal Hutu refugees displaced by the Tutsi RPF- President Habyarimana was finally forced to the negotiating table!
Paul Kagame and RPF forces were invited for peace talks that led to Arusha accords.
Major parties to the meeting were:
1). RPF leader Paul Kagame.
2). Rwanda president Juvenal habyarimana  and
3). Hutu hardliners.
They agreed to allow a two-party State with Tutsi becoming part of the Rwandan Government and national assembly. They agreed to land sharing and to allow the return of the Tutsi exiles.
But no one really wanted peace or believed they can co-exit peacefully
After the peace talks, it was alleged that Paul Kagame’s RPF soldiers infiltrated Kigali in plain clothes and started taking positions for a final battle. (He just signed the accord so the international community would not call him stubborn)
President Habyarimana on his part just wanted to keep his job and the support of the French government
The Hutu hard-line radicals they were already preparing for a final showdown - Genocide! Hardline Hutu will never share power with the Tutsis. The french Government and some European nations supplied them with guns, machetes and all dangerous weapons. through the radio broadcast, the Hutu were told to kill their neighbors the Tutsis living in Rwanda when they are given a signal. The interahamwe militia were also trained to carry out mass Genocide.
Rwandan President Juvénal Habyarimana got killed when his plane was shot down and he along with two African heads of state and the three plane's French crew members died. The Arusha peace accord went up in flames!
After the plane was shot down a civil war and genocide started began side by side in Rwanda cities, towns and villages. Paul kagame ordered his men of between 25,000 and 30,000 troops to take positions!
“The RPF launched a major offensive, which would have required weeks of preparations. His men killed both Hutu power brokers both military and civilians, many Interahamwe militia boys especially.. The Hutus on their part gave an order – "cut down the tall trees" and so began the horrendous Genocide. Hutu killing their Tutsi neighbors with help from Rwandan military and Interahamwe militia.
It took 100 days for Paul Kagame and his men to circle the city and effectively end the Genocide. Paul Kagame issued a new directive, effective till date. No more Hutu or Tutsis only Rwandans. To show Rwandans and the West that they were not a military dictatorship of Tutsi exiles, Paul Kagame appointed a Hutu president and himself as vice-president, minister of defence as a general in the army and the one who took important meetings with foreign heads of state. By so doing, Paul Kagame held the real power.
Revenge killings was forbidden and the word Hutu or Tutsi was banned.
Most Hutus and Militia who perpetrated the Genocide fled to neighboring countries. Hutus who participated in the Genocide were jailed but later released because its impossible to jail the entire population. Paul Kagame has since ruled Rwanda as the Official president for 19 years. He has transformed from it a blood -spattered wreck to an orderly society and a country with a vibrant economy.
Kagame