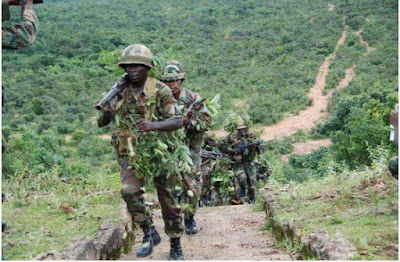 It was about 12yrs ago when Oshodi Busstop was still a mess.

It happened that an Agbero was trying to harass a soldier and the soldier brought out a knife and stabbed the Agbero. The Area boys under the bridge heard about it and mobilized themselves to beat up the soldier. He managed to escape but sustained alot of injuries.

Emboldened by this, the Area boys began to harass soldiers the next day. At about 2pm that day some soldier stood in front of the now Lastma office at Oshodi, beckoning on soldiers to alight from commercial buses to join them.

By this time their numbers have swelled to about 20. The Area boys who were ontop of the bridge saw what was happening and equally mobilized themselves with all kinds of weapon. Shouting and screaming atop their voice.

The solders stopped all the vehicles moving towards Oshodi in front of the Lastma office. They did this to create an open space between them and the weapon welding Area boys. The soldiers were unarmed but organized. They now lined up in two rows. I think ten on each row. They had a commander commanding them.

After sizing up the situation. The commander screamed Charge!!!! At his command they started running up the Oshodi bridge unarmed but shouting.

What I saw that day made me respect soldiers. 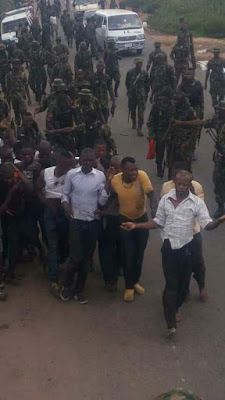 The Area boys that were shouting and welding their weapons saw the horror on the faces of those soldiers running towards them and took off.

They ran into the streets on the other side of the bridge with some of them dropping their weapons as they ran. That was how the soldiers took over Oshodi that day without shooting one bullet.

If you are living in the South East, please I beg you don't mess with soldiers. They are trained for war. Death means nothing to them. Don't mind those baying for blood amongst you. You still have more to live for. Don't throw your life away. 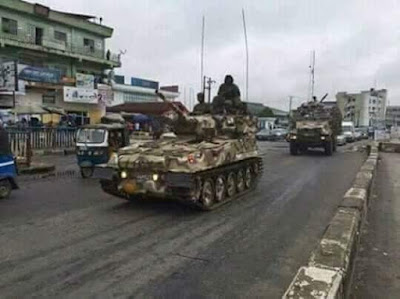 Our take @ Soji Graphics:
Just 3 sayings of the wise from Yorubaland, just 3.
1). It is the backyard of the so called cowards that undertakers carry the corpse of the so called brave men pass to the burial ground.
2). It is the so called brave men that perish in battle, it is the so called cowards that tell the story in a brave fashion.
3). A person that can cannot beat you in a fight but waylaid you on the road, will only more blows to his injury.
A word is enough for those who are wise. You don't fight a government with a well trained and well armed standing army with bare hands. Nor with mere mouth.
political
Location: Abuja, Nigeria