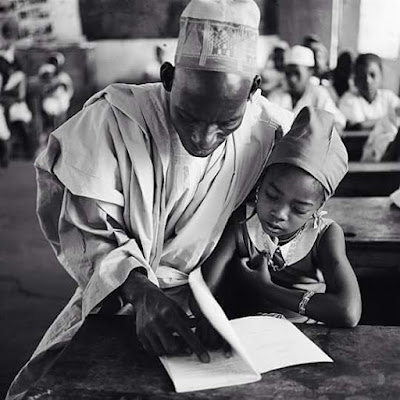 The golden voice of Africa, so I have heard of the appelation given this great man. It was when I heard him speak on tape, not only with a clear sonorous voice, but with an articulate oratory and diction of of a man who think very clearly and sequentially, that I agreed with those who gave him the name.
Abubakar Tafawa Balewa was of a truth, the golden voice of Africa, not just in oratory but, but in contribution and impact on his mother continent.
Thank God it has has been from one trouble to another for the generation of the killers of this rare breed of an African.
Down to earth to the core,
Tafawa Balewa came to power, to serve and not to 'eat'
Why?
1. He came at a time when power was not concentrated at the centre; and the regions have their autonomy to use their resources as they deemed fit. Obafemi Awolowo used his to build the first television station in Africa, the first of it kind sports complex, Liberty Stadium, and the first sky capper in Nigeria, Cocoa House. In addition to that, Cocoa House Complex headquatered the gigantic conglomerate Awolowo invested the region's cocoa money - Oodua Group of Companies that have outlasted him for decades.
So there was nothing much at the centre in Lagos to 'eat' for Balewa. So he practically came to serve his fatherland - Nigeria.

. 2. The black gold called crude oil, though somehow discovered, was not yet available in large quantity and how many decades it will last before it dries up, was still hypothetical. Besides that, money was not yet being made on it, in appreciable enormity as at the time Abubarkar Balewa came into power.
I was not surprised then that his political godfather and party leader in then NPC - Ahmadu Bello would rather send him to Lagos, while he stays back in Kaduna to oversee the proceeds of cotton and groundnut pyramids in the North, which the autonomous North also boasted of as their resources, as at that time.
So, Balewa came power with little to 'eat' and limited power to weild at the centre.
Not until the greed and lust for power and money of his military successor took the better part of him and he unitarilised the system of government thereby abolishing an hitherto autonomous regional system of government. So that there will be much for him to 'eat' at the centre? He never lived nor settled down for up to six months to 'eat' from his greedy scheming, before he paid for his misadventure with his own very dear life!
And Nigerians are still paying for his greed today, with an epileptic Federal System. While his own generation of kinsmen are still paying dearly for his greed and lust for till date. They have never known and rest since. Law of retributive justice have no respect for any, no matter their craftiness or bravadoes!

Let's return to Balewa for Pete's sake!
Balewa came to the centre in Lagos through the backing of a godfather, Ahmadu Bello. But Abubarka Tafawa Balewa was determined to have a mind of his own, and not to dance to the tune of any godfather. His subsequent speeches and presentations backed with corresponding actions said it all. That he has made up his mind not to be a puppet to any godfather. And this sent both of them on a silent collision course. An information Balewa in is characteristic charismatic, humble and diplomatic nature managed throughout his stay in power and would have managed well and continue to manage well, has he stayed longer in power.

There was no verbal altercations nor open confrontations between father and son on the pages of newspaper on the airwaves, radio or television. Simply a silent disagreement. On the side of Sardauna ,out of an aristocratic overbearing disposition, on the part of Balewa, out of firm principles. And the two carried on business as usual, as if nothing was amiss. One calling the shots at his region, where every mortal quake at the roar of the vassal lord, and at the centre in Lagos, where the other took upon himself the yoke of servant-hood.
May the legacies of Sir Abubakar Tafawa Balewa, guide and call all of us  to order and sober reflection, repentance and restitution at this trying moment of our nation.
Soji Omole.