After completing works on one of my latest forthcoming books, l sent the manuscript to Bishop Matthew Kukah for the FOREWORD. Because of his busy schedule, it took some time for him to go through the manuscript and write the Foreword. I specifically chose him for the assignment because as a member of the Oputa panel, some of the issues were dealt with at the panel.
Though the book focused majorly on the miscarriage of justice by the Okadigbo Tribunal, l went further to dig into the genesis of the crisis at Zangon Kataf, and by extension, the Southern Kaduna, where l highlighted a 1940 letter which triggered the mistrust.

Below is the Foreword to the yet to be published book by Bishop Kukah. I had planned to publish the book first quarter of next year but l have a dilemma. In view of the current crisis in Southern Kaduna, l don't know if it is right to release the book at this time, so as not to exacerbate passion and emotion, as many people in Southern Kaduna would be interested in the book. Please, l need your opinions on this, whether or not to release the book at this time.

When Nelson Mandela titled this biography, A Long Walk to Freedom, it summed up the philosophy of the human struggle for Justice.  In real life, things often work out differently because no sooner do we attain one freedom than we realize that new struggles emerge for other forms of freedom. Thus, while independence of nations always elicited songs of joy and shouts of freedom from slavery, subsequent developments in our countries tended to suggest that independence was often the beginning of bigger fights often leading countries to more dangerous tunnels of instability. Nigeria’s story has not been too far from this.

In 1957, when the British sensed that their period of subjugation of the people of what would later become Nigeria was coming to an end, they knew that there was still a lot of work to be done to achieve national cohesion among the motley groups that would constitute the new country. They wisely set up a platform with the eponymous name; The Commission to Inquire into the Fears of Minorities and the Means of Alleviating them. The Commission traversed the country and took views and petitions from various Minority groups. In the end, they produced a comprehensive Report for the government of the day.

The Report showed a wide range of allegations of exclusion and feelings of oppression, injustice and subjugation by the various Minority ethnic groups across the country against the dominant ethnic hegemonies around them. Whereas other ethnic minorities in the south had to contend with marginalization based on ethnicity, the northern Minorities had to face the double jeopardy of marginalization based on both ethnicity and religion.

In response to this, the Midwest emerged. For the north however, the regional government arm-twisted the colonial administration to accept their suggestion that the agitations of the Minorities in the Middle belt would be best addressed later on. Thus, they managed to squelch the dream and demand of a Middle Belt Region. Of course, in the end, nothing happened until new states were created. But even these states did not meet the demands and agitations of some of the diverse ethnic groups in the area.

In what is now Kaduna State, the creation of Local Government Councils and Chieftaincies have still not addressed the feelings of exclusion. It is a measure of the honesty or the lack of it by successive governments that almost sixty years later, the current Governor of Kaduna State has only just set up a Committee to Enquire into the grievances of the peoples of Kaduna State.

Over the years, a rash of agitations by various ethnic groups in what is often referred to as the Middle Belt, the haven of the Christian community in the region. The agitations have often been over religious or ethnic disagreements.
One of the most significant tests in the relations between the Minorities came with the crisis of Zangon Kataf, which occurred in 1992.

The violence presented the nation with one of its greatest challenges. In the course of the violence, many lives and properties were lost on both sides. However, the government took the view that the Tribunal’s focus should be on the trial of General Zamani Lekwot and his kinsmen who were the principal accused in the crisis. The trial itself placed the judiciary itself on trial.

The book in your hands, "Judicial Terrorism" traces the legal intrigues in this struggle with justice in this case, under the Tribunal which was chaired by Justice Benedict Okadigbo. Sadly but truly, with Military Tribunals, judgments were often concluded before the Tribunal itself was constituted. Its job was often simply to present a semblance of process. Their duty was either to twist, turn, or manufacture evidence to achieve this end. These Tribunals would go down as the greatest acts of malfeasance against justice in our society.

These illegalities often offer platforms for the victims to capture the issues of the moment. Nelson Mandela’s speech at the Rivonia trial has become the stuff of legend and history today.

Hence, when their lawyers decided to withdraw from the case, an embarrassed and confused Justice Okadigbo asked General Lekwot how he and his kinsmen wanted to proceed without the protection of Lawyers. General Lekwot’s prescient response was: "We should ask your Lordship that question. The same government that established this court to investigate the truth, apportion blame and award punishment, went behind the door and passed laws that have stripped the accused of their rights of fair defence, meaning that a decision to eliminate us was somewhere outside this court."

In this case, the late G.O.K Ajayi’s courage was similar to that of the late Justice Thurgood Marshall and his many battles in the US Supreme Court. Mr. Ajayi displayed courage and commitment, standing for a people that had neither resources nor influence against the tyranny and the overbearing influence of an oppressive state. Gratitude must go to those young gallant lawyers such as my good friends, Gani Fawehinmi, Clement Nwankwo of the Constitutional Rights Project, CRP, Chidi Odinkalu, Femi Falana and many other Human rights lawyers.

By laying bare the facts and letting them speak for themselves, Mr. Akinnola has rendered a service not only to the people of Zangon Kataf, but to all those who are serious about the prospects of our living together in peace and harmony as common citizens with equal rights before the law in the same country. He deserves both our appreciation and praise for this painstaking work. The struggle for justice is often a lonely one, but Richard has done great service by laying bare the facts of this saga. This book is a bouquet of love, a vade mecum for all those who struggle for justice and peace. 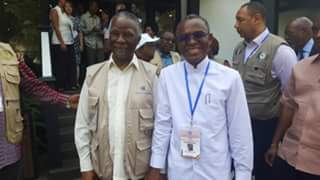