President Buhari And The Grass Cutters

See no evil and say no evil against our government of change was the swan song in the aftermath of a victory that who have conquered the now moribund People Democratic Party in 2015.

We were inundated with gory details of billions of dollars stolen by those who carried umbrella for 16 years. Gory details in the sense that some of those stolen money were gotten through death bodies of our compatriots fighting the vermin in North East Nigeria.

When you X-ray the body language of President Muhammadu Buhari, in the early days of his administration, that gave us instant transformation in the energy sector, break bottles of beers in refrigerators and created an exclusive club named Wailing Wailers, then you will appreciate the euphoria associated with been a hailing hailer. Perceived success of this administration was like a sniff of hard drugs for the children of anger who gleefully exponentiate a fait accompli. We have successfully exterminated corruption, the Roman crowd of hailers announced to whoever has ears; excluding Wailing Wailers who are irredeemable lot.

Remember the scripted words " let's start from somewhere and with some people" whenever Nigerians complained about corruption among members of Mr President's party. Remember calls for investigation into sources of funding for APC and PDP Campaign towards the 2015 general elections and how we came up with only Dasuki as the author and finisher of our corruption?

Fast forward to the ending of 2016. Mr President is today surrounded by a group who are brazenly diverting money meant to ameliorate the suffering of our people. Chief of Staff, Secretary to the Federal Government, Security Chiefs, Attorney General of The Federation.......in an exclusive club of untouchable grass cutters.

President Muhammadu Buhari must address these issues if we are going forward in 2017.  Hailing hailers should see beyond party politics and consider our country first while wailing wailers must maintain the momentum. The grass cutters club must be disbanded.
Usenemeng Ikon 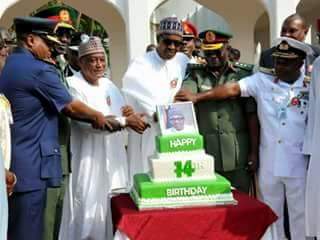