Student once introduced MMM to me - DPO

Following the face-off that occurred between the men of the Nigeria Police Force of the Atiba Division and the students of the Federal School of Surveying, Oyo on Tuesday, 13th December, 2016, we were able to reach the two parties involved in the incident and  a report of the students' version was published earlier.

As promised, a call was put through to the Divisional Police Officer of Atiba Division, SP Sadiq Mana, for a balanced report. Unfortunately, the DPO, who was a principal actor in the incident was not available in the  office but during a telephone conversation that lasted for about 30minutes, he was able to give us a breakdown of the whole palaver.

Kindly note that what I am writing is based on my discussion with the DPO and not an opinion formed by me. Thanks.

SP Sadiq Mana
After briefly introducing myself to the DPO and stating the reason for my call, a note of eagerness to open up was detected in SP Sadiq's voice.

He confirmed that the whole issue stated from a food canteen close to the school. He was about eating when the student of the Federal School of Surveying approached him.
When asked if he had known the boy in the  past, the DPO answered that he actually met the boy once when he came to introduce the popular Ponzi Scheme MMM to him. He said he didn't give him a positive response when he introduced the scheme to him and I believe this is what made the student mad.
He said the student walked in and upon sighting him  said "See you, na so so food you sabi chop. You no sabi better thing. Who you be sef. Crazy man! Wetin you wan do? Oya call your people now. Call  anybody make dem come arrest me nah. Useless man!"

Apparently, the DPO was not only baffled but also embarrassed. He pointed out that the student was accompanied by his friend who kept cautioning the boy. He said even customers were also baffled.

"When the embarrassment was becoming unbearable, I ordered that he should be arrested and taken to the office. When we get to the office, he will tell me what I did wrong to him."

According to the Officer, the student was arrested and taken to the office while he resumed back to his food.

He went further "Ask those at the canteen. They were all baffled and abusing the student. He was the only one taken away and that is to tell you it was not a personal issue.  His friend who was with him was not arrested. Ask him if he will tell you the truth."

My people, that's  the genesis of the brouhaha. The student was taken into custody truly as also stated by his colleagues.

If you will recall, according to the students' version, the boy was chained and asked  to weed a portion of  land.  Unfortunately, there was no evidence to either back this up or prove it wrong.

When  I asked the DPO if that actually happened, he denied the claim. He said the boy was not even locked up in the cell. He only told them to take him to the station pending the time he would return there to question his rudeness.

The DPO said he was still at the food canteen when the President of the FSS Students' Union called him. The President was requesting for the DPO's audience at the station.

He immediately finished his food and rushed back to the station. According to him, on getting to the station, he sighted a group of about 50 students in front of the Police station shouting and threatening to burn down the station if the guy was not released in 10 minutes.

This came as a disappointment to the DPO who thought he had a good rapport with the students of the school. He also said that he thought he was only going to meet  and discuss with the President and probably some excos of the union.

"They were shouting that they wanted to burn down the station. They had petrol and were getting violent. They didn't even ask about the crime the student committed. All they wanted was for me to just release the guy."

Apparently disturbed that things were going to get out of hands, the DPO said he called for support from the men of the Special Anti-Robbery Squad to disperse the students and prevent damage of public properties.

According to the students, when the SARS came, tear gas was released and shots fired sporadically at them. Some students picked up cases of the bullets fired at them as evidences.

"Of course, we used tear gas and only rubber bullets. That is what we use to disperse mobs and we only used them to chase the students back into their school compound. It was not as if we were chasing them around."

The DPO, who was really angry at the students' attitude stated further that the student who started the issue and others who were caught in the protest were released that same night.

"Ask the student union president, we released all the boys including the rude guy  although I told them we were going to prosecute them. They are future leaders and were behaving like that. The change must begin with us if we actually wanted a good future."

"This morning, the school management already apologized to me and they have sent a letter to that effect concerning the students' unruly behavior. I have accepted to drop  the charges against the students and the management promised to set up a disciplinary committee to punish the students."

That was my conversation with the young DPO of Atiba Division, SP Sadiq Mana who claimed he was harassed and insulted by the student of the Federal School of Surveying, Oyo.

Unfortunately, I still have some begging qquestions;

1. Was the student under the influence of something when he approached the officer?

2. If the student was not chained, asked to weed and sighted by one of his colleagues, would the students have quickly mobilized themselves and gone wild?

3. If the live bullet casings picked by the students were truly discharged by the police, why would they use such to disperse a group of protesting students. 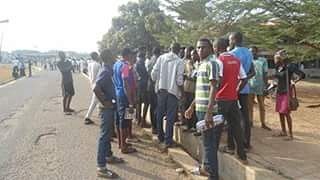