IBRAHIM MAGU'S REJECTION BY THE SENATE:  A POLITICAL WITCH HAUNT OR A GENUINE EFFORT TO FIGHT CORRUPTION?
When I heard about the refusal of the senate to confirm Ibrahim MAGU as EFCC Chairman, I decided not to comment immediately because of two solid reasons. I had in the past commented on issues believing their were factual on face value but they turned out be false or half truths. Secondly, knowing our political terrain, It is possible that some pecuniary interests are being protected. I therefore tarried a while and awaited facts to unfold.

Now I think I'm sufficiently informed to comment confidently.
In case some of us don't know, Ibrahim Magu has been having a running battle with a factionalized kitchen cabinet of PMB. It has been reported on some on line and conventional media outfits that the duo of chief of staff( COS) and his political godfather Maman Daura are not comfortable with Magu because he has been investigating unwholesome activities of an oil company known as Sahara energy where the duo have interest. The interest of COS in the oil sector is not hidden as against all known rules and ethics of public service the man being COS is a member of NNPC board and that he appointed the present GMB of company to preserve and protect his interest. All entreaties to Magu to back out, he refused since he has the backing of the president. The cabal were therefore bent on getting rid of him. A man Friday was identified in the security circles to nail him at all cost. The other factionalized  kitchen cabinet is being led by the National security Adviser, Gen Moguno who has the backing of the president to support the job being done by Magu.
The senate became an ally of the COS group because they were not comfortable with Magu determined efforts to diligently prosecute the several senators with various allegations of craft against them, especially the ex-governors that call the shots in the red chamber. Again, Saraki who is facing trial for various criminal offences has been promised safe landing if he cooperated with COS cabal. For a start, the criminal charge against him and his Deputy bordering on forgery had since been dropped. With this master stroke of denying Magu confirmation I can say authoritatively that the Saraki's case with Code of conduct bureau  is as good as gone with the wind.
Having given the background to the Magu brouhaha, Let us dwell on the facts which have been thoroughly a reliable and authoritative online publication.
The first charge of carting officials documents to his house and refusing to hand them over, was found to be untrue. It was a case of persecution by Mrs Farida Waziri who took over EFCC from Nuhu Ribadu.

Because of the voluminous nature of his work, Magu usually took certain documents home to work on in the night and kept them in a safe in his house. When he was transferred from EFCC he had already prepared his handing over notes and was in the process of handing over them, when his house was invaded by security operatives on the orders of Mrs Waziri where his house was ransacked and documents taken way. The matter was investigated by IGP Okiro and Magu was not found wanting, instead he was promoted.
The second allegations of payment of his house by one Mohammed Umar, a retired air commodore who is being investigated by EFCC was totally false. The house was paid by FCDA and evidence of the payment of N39.628m through CBN was tendered as evidence.
The third allegation of traveling in private jet of Rtd Air Commodore Mohammed Umar was found not to be entirely true. That the hitherto close relationship between Umar and Magu was established when they were members of the presidential team on investigating  procurement of arms and at that time Umar had limitless access to the president before the criminal charges sufficed . It was within that period before he was charged for corruption that they travelled to maiduguri in the man's private jet and in company of the Director of Finance of EFCC and there was no MD of a bank being investigated by EFCC in the aircraft.
The fourth allegation was that he paid for first class when he travelled to lesser hajj despite the presidential directive banning public officers from using first class. Well Magu said he used his resources not govt funds. The only snag is where did he get N2.9m to pay for first class? Well being a public officer as I was one, he could use his fat salary and other entitlements such as estacode etc to pay for first class.
Now that is not primary concern. My primary concern is how can a whole senate fail to abide by simple rule of investigation: fair hearing. As a hollowed chamber where justice is being dispense and to avoid being accused of witch haunt, I expected  the senate to while inviting Magu for screening, he should be avail with these allegations and ask to come and defend himself in a full glare of the public and the press . If he said he was cleared of allegation of carting away of officials documents, Okiro the IGP that cleared him is still alive. What is difficult about inviting the IGP to lend credence or otherwise to his assertion. On the issue of payment of his house rent, the FCDA is there to confirm or deny and CBN transaction which has been tendered as evidence could also be verify by the senate.  The issue of traveling regularly with an accused also require further investigation. That is whether the Magu travelled with Umar before or after he was a accused. The issue of traveling by first class is dead on arrival but the onus of prove lies with the senate ie to show evidence that Magu used public funds to purchase the air ticket.
The same method was used against SGF. He ought to have been given fair hearing, but I'm not  dwelling on his case because apart from name calling the senators he didn't do much to defend himself apart from making generalized statements which were not substantiated wth facts.
Based on lack fair hearing in the case of Magu and based on the facts adduced by premium times, I'm deeply convinced that the senate did a shoddy job and need to revisit the matter by giving Magu fair hearing and in the full glare of the public. If this is not done, I'm left no choice but to believe  the conspiracy theory against Magu as summarized in my preamble above,
The issue that is quite worrisome is that how can the president allow his kitchen cabinet to be so factionalized and some of them even working against his interest. This is very sad, so sad and this cabal if not gotten rid of will continue to cause collateral damage to PMB change mantra. I may be wrong but this my honest and objective views as a Nigerian patriot with no other Interest to protect except that of my dear country that has given me so much. Fenny J. Fwa. 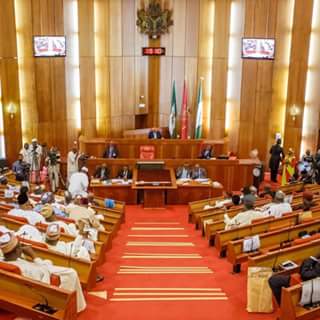