Chief Richard Akinjide SAN, a member of the Balewa cabinet, had this to say about what transpired that fateful day in 1966.....

"Talking on the first coup, when Balewa got missing, we knew Okotie-Eboh had been killed, we knew Samuel Akintola had been killed. We the members of the Balewa Cabinet started meeting. But how can we have a cabinet meeting without the Prime Minister acting or the Prime Minister presiding?
So, unanimously, we nominated an acting Prime Minister among us and we continued holding our meetings. Then we got a message that we should all assemble at the Cabinet Office. All the Ministers were requested by the GOC of the Nigerian Army, General Aguiyi Ironsi to assemble. What was amazing at that time was that Ironsi was going all over Lagos unarmed.
We assembled there, having nominated Zana Diphcharima as our acting Prime Minister in the absence of Balewa whose whereabout was unknown. We approached the acting President, Nwafor Orizu to swear him in because he could not legitimately act as the Prime Minister except he was sworn in.
Nwafor Orizu refused. He said he needed to contact Zik who was then in West Indies. Under the Law, that is, the Interpretation Act, as acting President, Nwafor Orizu had all the powers of the President. The GOC said he wanted to see all the cabinet ministers. And so, we assembled at the cabinet office.

Well, I have read in many books that we handed over to the military. We did not hand over. Ironsi told us that "you either hand over as gentlemen or you hand over by force". These were his words. Is that voluntary hand over?

So, we did not hand over. We wanted the acting Prime Minister to be in place but Ironsi forced us, and I use the word 'force' advisedly, to handover to him. He was controlling the soldiers.

The acting President, Nwafor Orizu, who did not co-operate with us, co-operated with the GOC. Dr Orizu and the GOC prepared speeches which Nwafor Orizu broadcast, handing over the government of the country to the Army. I hereby state again categorically as a member of that cabinet that we did not hand-over voluntarily. It was a coup" 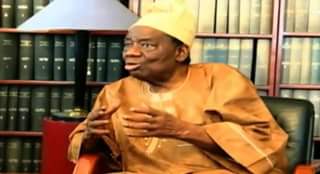