The General Overseer of Omega Fire Ministries International (OFM), Apostle Johnson Suleman, has asked members of the public and his congregation to dissociate themselves from anything that has to do with Mavrodi Mondial Movement, an investment scheme popularly called MMM, and any other get-rich-quick schemes, saying they are satanic ventures aimed at further impoverishing the poor and stealing from the rich to enrich some other people.

Suleman, giving a sermon at the maiden edition of his ministry’s International Amazing Grace 2016 programme, said “MMM is Satanic and those involved in it are demonic.”

“MMM is an agenda set to bring limitations and restrictions into your life, it is meant to make poorer the poor and take away from the rich,” said the clergyman, adding that if you want to know more about MMM, “go and check the founder. He was a fraudster in America, who defrauded a lot of people. And that’s what you are involving yourself in and you are a Christian, looking for easy way out.”

Many Christians have gotten involved, he said, “but if you are already involved in MMM, you need prayer. I have to pray for you today. MMM and its likes are not of God. Any quick fix way for money is not of God because some people are being defrauded to enrich some other people.”

The clergyman warned further that any quick-rich scheme is wrong, saying that “even kings can be stranded. Anyone can be. You may be stranded but you can’t be strangled.

“In life, everything you get, if it’s not favour from a particular individual. If it’s quick favour through a process, you will pay for it later. If it’s a person you know that walked up to you and blesses you, take it. That’s favour. But a quick business transaction that can bring a return of over 200 persons, is not of God.

That is why we take it upon ourselves to do charity works, help the needy and feed them with the Word. When you give, your greatness is not in your properties but in how many lives you have sustained,” he pointed out.

Fresh in Suleman’s charity activities is the support given to a popular Nollywood actor, Leo Mezie, who was down with a kidney infection. At the point of soliciting funds from the public, it got to the hearing of Apostle Suleman. In his uniqueness, the troubled actor was advised to stop raising funds but to seek proper medical check up to identify what was really wrong with his health. On getting to England, he found out that it was just an infection not that his kidney malfunctioned.

The man of God took it up from there, paid for the cleansing and treatment, according to the actor himself while giving public testimony of his miraculous survival. “Apostle Suleman took over all my medical bills, I mean every of it through my stay in the UK. I did not lack anything. I thank God for using Apostle Suleman to save me from death.”

Meanwhile, the Amazing Grace night was a powerful evening of miracles, impartation and divine restoration which held at the headquarters of the Omega Fire Ministries Worldwide (OFM), Auchi, Edo State.

The first-of-its-kind programme, among fantastic gospel music makers listed for the praise night was Austine, an amazing worshipper and song leader. Also, there was the emerging Gospel R n B Sensation, Collins Kings.

Collins whose debut single, “Before your throne”, has been enjoying massive airplays from around the globe. ‘Eshe Baba’ crooner, Nancy Grace, 3JWYZ, a celebrated gospel music minister with several amazing hit songs to his credit; The Triumphant Sisters, a group of beautiful voices, among others. 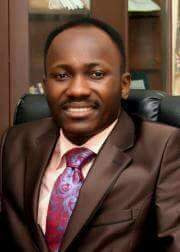